(Cut and paste cause links don’t work yet) https://www.youtube.com/watch?v=V0e18FEcO-w

There stands an ash called Yggdrasil,
A mighty tree showered in white hail.
From there come the dews that fall in the valleys.
It stands evergreen above Urd’s Well.

From there come maidens, very wise,
Three from the lake that stands beneath the pole.
One is called Urd, another Verdandi,
Skuld the third; they carve into the tree
The lives and destinies of children.

When the sun dipped below the horizon on the distant fjords the children would gather close around the fire as a distant howl of a wolf marked the beginning of another night’s hunt. The wise man Bjarni would rattle the bones on his large cudgel and tell them the following story of creation. Donning an eye-patch and a large gold ring the children believed he was Odin himself come down from Asgard to give them this bedtime story. The crackle of the fire and wind in the trees made poignant his tale of bravery, honor, and the creation of this hard-headed race of man. 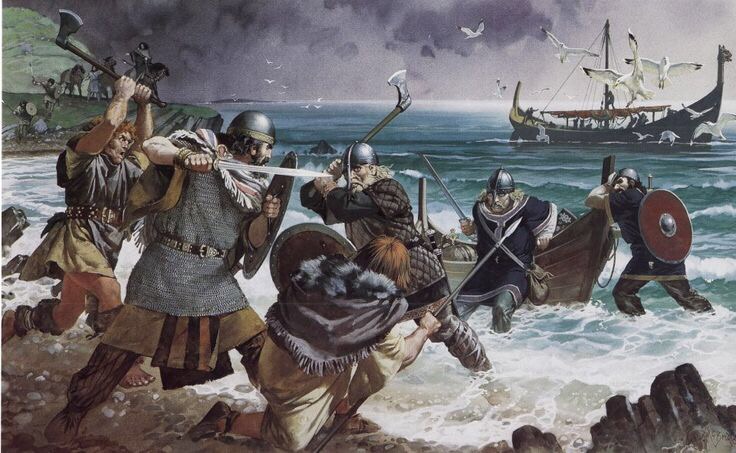 “At first there was only a great void. But to the North of this void there formed a region of mist and ice, while to the South grew a region of fire. Niflheim was the name of the North, and Muspellsheim of the South; and the heat from the latter melted some of the ice of the former, which shaped Ymir, the Frost-Giant with a human form. From Ymir’s sweat came the race of Giants, and as the glacial ice melted further a huge cow was created to feed the Giants. This cow in turn was fed by salt contained in the ice. One day it licked the ice and hair emerged, on the next day a head, and on the third day Bur emerged, fully formed. Bur had a son, Buri, who had three sons — Odin, Vili, and Ve. These three were a new race, not Giants but gods. They banded together and murdered Ymir. Most of the other Giants drowned in Ymir’s blood, which created a great sea. From Ymir’s body the three gods made solid land, the earth, and from Ymir’s skull they made the vault of the heavens. Odin and his brothers then created the race of dwarves from the maggots in Ymir’s body. Other gods joined these three, and together they erected Asgard and all its halls to be their own home.
Having established their supremacy, the gods made the first mortals, shaping a man from an ash tree and a woman from a vine. The gods bestowed breath, energy, a soul, reason, warmth, and freshness on this first couple. And from their male descendants Odin chose only the bravest to live in Asgard after they died, for these warriors would aid him in the final showdown with the forces of evil.

The cosmos was supported by a tremendous ash tree, Yggdrasil. One of its roots extended to Niflheim, which was the netherworid; another to Jötunheim, the dwelling place of Giants; another to Midgard, the home of man; and one to Asgard, the home of the gods. In its upper branches lived a squirrel and an eagle, while at its rootage lived the serpent Nidhögg, which gnawed away, until at the end of time the whole structure would collapse. In the meantime the Norns, or Fates, watered the tree to keep it from dying.”

yeah videos are back!!!

so what do you guys think of the new videos?

I'm sorry, but we no longer support this web browser. Please upgrade your browser or install Chrome or Firefox to enjoy the full functionality of this site.